The Penguin Book of Nonsense Verse 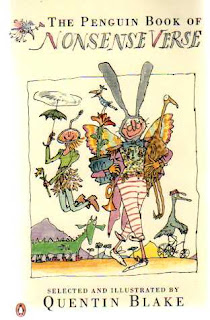 A few weeks ago I ordered a few Quentin Blake books for my sister Galen, for her birthday.  While I was searching, I came across The Penguin Book of Nonsense Verse which I ordered for myself.

I've been pouring through it, a few poems each night before sleep, and I have been enjoying it tremendously.  The poems were not only illustrated by Blake, who is one of my very favorite illustrators, but he selected the poems as well.

In the introduction to the book, Blake says:


"There is one respect in which nonsense poetry isn't in the least bit crazy; the rhymes, the metre, the verse-forms are just as regular as, and in many cases identical with, those of more serious poems.  Indeed, it's the fact that nonsense poems preserve this decorum - that at first sight they appear to be serious - that makes them effective.  More than that it allows them, sometimes, to have their own mysterious poetry and atmosphere, so that they are funny and serious at the same time."

This observation is dead on, and I have been enjoying the silliness of work as much as the poetic qualities.  Plus, it's got poems by Roald Dahl, Ogden Nash, Edward Gorey, Shel Silverstein and a bunch of other greats.  Highly recommended!