Okay, back to the book!  I'm afraid this entry might be a bit dry, but we need to plow through to get to some of the more exciting stuff!

Exercise 10 was all about rhyming.  For the first part, I was given ten minutes to come up with as many rhymes for "girl" as I could, using the masculine "url" sound for the rhyme.  Here's what I came up with:


Next, I had ten minutes to come up with rhymes for the feminine ending in "Martyr."  I only did slightly better with this one:


Mr. Fry said that his rhyming dictionary had 24 rhymes for "girl" and 28 for "martyr" and that if one could get ten that was pretty good, so I felt okay about this.  In the second part of exercise 10 I had to come up with at least twenty words about things I could smell, see or hear in my current location.  When I wrote this I was staying at Claire's old place in Oakland, so here is some of what I came up with: 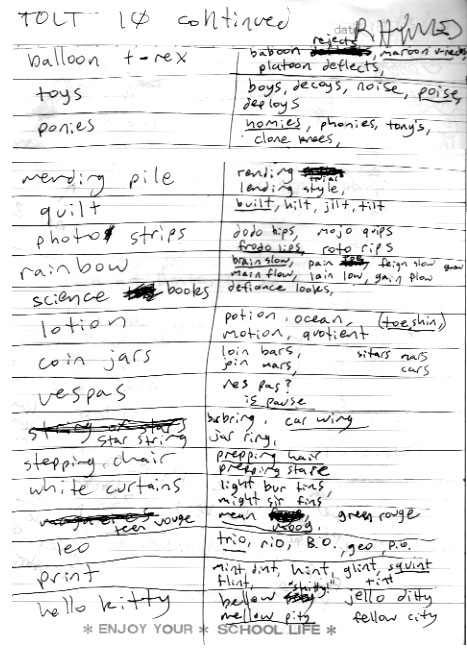 Next up was exercise 11, which was the only exercise in the book that I feel is poorly designed.  In the section preceding exercise 11, Fry showcases a series of open forms: Terza Rima, Ottava Rima, Rhyme Royal, Ruba'iyat and the Spenserian Stanza.  For each form, he has written a poem IN its form, and then he supplies one other example of each.  The exercise is then to write you OWN poem about the form, using the form.  This is extremely frustrating, because I only just learned about the form and so as I look back to try and figure out what the form is, I'm looking at Fry's example, which is written on the same topic that I'm trying to write upon.  I only made it through the first form before I got extremely frustrated and gave up on the rest of the exercise.
In Terza Rima mode, the rhymes are three
And in the first two tercets you'll use two
First there's ABA, then BCB
Then if you know what you are supposed to do
CD CD will use the final ryhme
Your first section of T.R.'s through!

But this form can repeat time after time
Its interlocking scheme will never end!
I know this poem's not worth a lousy dime
but check out Dante, Terza Rima's best friend!

For exercise 12, I was to finish off a ballad that was begun by Mr. Fry.  He supplied the first two stanzas (in italics below) and then I continued the rest of the story (I'll warn you, it gets a bit gruesome).  This was fun because I didn't have to worry about meter or syllable count, as long as the lines rhymed and it had a nice bounce.  Here goes!

Now gather round and let me tell
The tale of Danny Wise:
And how his sweet wife Annabelle
Did pluck out both his eyes.

Now Danny Wise was quite a flirt,
He talked to all the girls.
Lewd comments he would ofter blurt
When passed by golden curls.

Annabelle grew mad with rage
To see her husband acting so.
She felt as though locked in a cage
While he was flitting to and fro.

One night while Danny took repast
His wife snuck to the loo.
And there she got revenge at last
With some super glue.

See, all those years of looking 'round
Had weakened Danny's eyes,
So a pair of glasses were often found
On the face of Mr. Wise.

But lately the specs had not been seen.
For contacts he'd traded them in!
Danny thought the contacts were keen,
So the glasses went in the bin.

And now while Danny ate his fill,
His wife had found his contact case.
The saline water she did spill,
A wicked smile upon her face.

In its place, she poured the glue,
Some in right and left.
Then down the stairs Annabelle flew,
So sneaky and so deft.

That night before Danny went to sleep,
His contacts he took out.
And in the glue they rested deep,
Which Danny knew nothing about.

The morn, you can imagine, my friends,
For Danny was quite a surprise.
When he put one glued-up contact lens
Right onto one of his eyes.

He screamed for help from Annabelle
Who calmly entered the room.
He asked her if she knew what the hell
had happened to her groom!

She gave his arm a tiny pull
And then there was a "pop."
No longer was his socket full,
His eye now sat on finger top.

Dan wailed "I'll make amends!"
He tried to back away.
"You forgot your other contact lens."
He heard his dear wife say.

Now when a sweet young thing walks by,
Old Danny can't remark.
He is a much more faithful guy
Now that he's in the dark!

Okay, that's that.  I'll try to post some more exercises next week!
Posted by Alec Longstreth