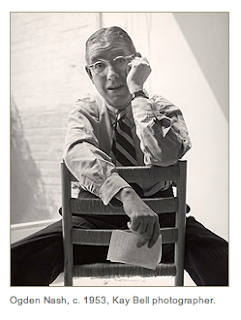 Every week or so, Claire and I will head over to the brand new library which was just built across the river in West Lebannon, New Hampshire.  We usually check out a big stack of  picture books, whichever ones spark our respective fancies, and then we read them out loud together before falling asleep each night.

A few trips ago, I came across a book called The Tale of Custard the Dragon by Ogden Nash.  I mostly picked it out because it had nice dragon illustrations (by Lynn Munsinger) but I found upon reading it, that I was equally charmed by Nash's verse.

The little bio for Nash on the book's dust jacket sang his praises and then some, saying he was a master of "light verse" and humorous poetry.  A quick read of Nash's Wikipedia article confirmed these endorsements.  It turns out that tiny sayings such as "Candy is dandy, but liquor is quicker"  are actually poems of Nash's (that one is titled "Reflections on Ice-Breaking") and the page also showcased some of his many charming limericks and short, funny poems.  Which is to say, EXACTLY the kind of poetry I would like to write.

We looked in the library system for a book of Nash's poetry, but alas, there were none.  But a few months later, Claire and I found ourselves in Montpelier, Vermont, attempting to kill an hour before a movie started.  We headed into the Montpelier library, and found a nice neat stack of Nash books in the poetry section.  I flipped to page after random page, and each poem I found seemed to be winking up at me, as I smiled back down at them.

I ordered The Best of Ogden Nash which arrived a few days ago, and every page has sent me chuckling.  I am charmed by his wit and humor and rhymes, though I think I'm driving Claire nuts, with my constant "Ha ha, Claire!  Listen to this one!"  As per the instruction of The Ode Less Traveled, I'm reading the poems out loud (usually quietly, to myself) and the meter feels just right.  For some reason, I'm able to read these poems much faster than any other I have read before, maybe because of their simplicity and straightforwardness.

It's so great to see an example of someone doing exactly what I want to do with an art form.  This book already has me excited to write more poetry and I know it will continue to do so.  ANYWAY, I'm only on page 23 (of 460!) but I'm so in love with it, I wrote my name on the front endpaper with INK.  It has already earned a place of honor on my shelf of poetry.
Posted by Alec Longstreth